Hello again it’s me Max with another blog post in Porto, Portugal 🇵🇹 Yay¡!¡!😄. It has been really fun staying here in Porto and we have done some really fun things since the last blog post (thanks for the views!). We have also been using DuoLingo to study Portuguese and a lot of the lessons include writing “eu bebo cerveja” (I drink beer) or “o cachorro bebe cerveja” (the dog drinks beer) which is very hilarious for me and Henry. On Thursday we went to Jumpers again and that was really fun. My dad got a video of me doing backflips on the really bouncy trampoline.

We also went to the park later that day and played for a while. The next day we went to Ramos Pinto, the famous port winery, and got a tour and tasted some wine. I did taste some of the wine and it was not as bitter as most wine because port wine is sweeter than other wine because they stop the fermentation process of the grapes so the wine will not go bad when it gets shipped out to other places.

We also went to the same park again and got some ice cream from a place called Mo-Mo. I got the flavor pineapple and ginger which was actually pretty good.

On Saturday in the morning we went to a park called Quinta do Covelo were we played for a while and spun each other around in this funny circle spinning thing which was probably built by a crazy person but it was actually really fun (if you don’t throw up first).

We also climbed on the play structure and swung on the zip line. 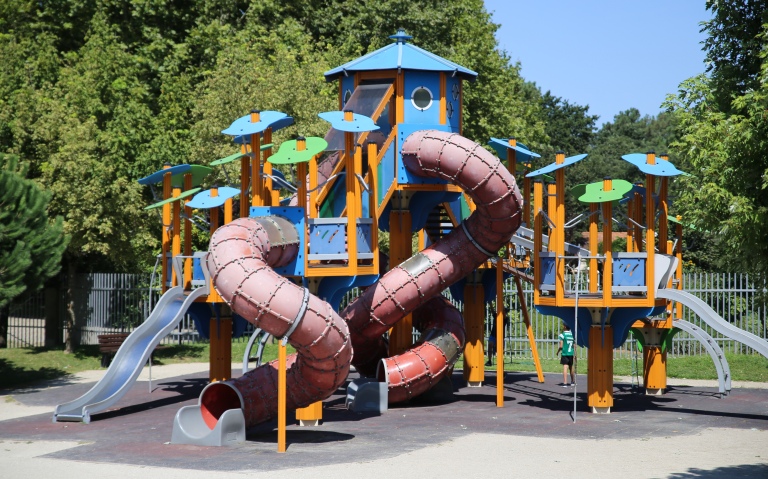 After we ate lunch in the park Henry and I got some ice cream from a soft serve stand that was so good that when my dad tried mine he had to go get his own! When we left the playground we went to walk around the park and we saw a little man-made waterfall that was cool. When we took the Uber home Henry was excited by the fact the it had free candies so we each got one.

Yesterday we went to a beach called Praia da Granja that had a lot of big rocks in the water and good skipping rocks in the sand. We stayed at the beach for a while and dug some holes in the sand but covered them up when we were done. After we left and had some lunch, we took the train back to São Bento train station and walked home. Today is our last day in Porto because we are leaving tomorrow to go to Barcelona and then to Neuwiller, France where my second cousin Lucca and his mom and dad live. The funny thing about where they live is that it is almost on the border of Switzerland and Germany so you can walk over to Switzerland from their house and it is only a short drive to Germany. I can’t wait to get there and see them again and and I will probably write another post then. For now we are just packing and we might go to the park so keep in touch and I will write a new post soon!

One Reply to “Eu bebo cerveja!? (not really)”