On this trip, we’ve been fortunate to avoid any truly traumatic experiences. But we have had several unpleasant experiences. With travel, and maybe life in general, those challenging experiences can end up becoming some of the most memorable and defining ones. In that spirit, here is a collection of some of our Best Worst Moments so far for this trip…

Day 1: Sleeping in the park | Lisbon, Portugal
Let’s start with a mild one. After flying overnight from Chicago, via Atlanta, we arrived in Lisbon a few hours before our apartment was ready. We were sleepy, jet lagged, confused, hot, and carrying all of our luggage.  We found a patch of grass without too many cigarette butts and tried to sleep for a couple hours in the midday heat. It was our first lesson in learning to sleep just about anywhere. 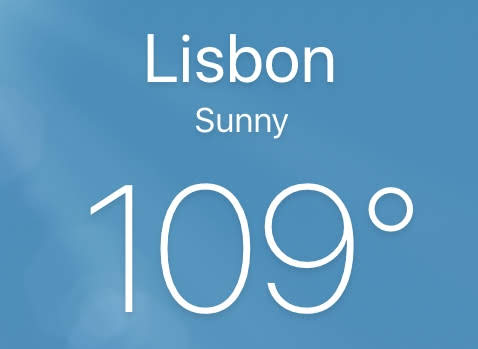 Day 49: Henry’s first blood | Ljubljana, Slovenia
At the Otok športa Koseze playground, the boys found the most dangerous piece of playground equipment available; a spinning wheel meant for who-knows-what kind of exercise. It had a broken handle with an exposed sharp metal edge. The boys wrestled over it until they lost control, resulting in a spinning uppercut to Henry’s chin. He was left with a bloody gash. Very alarming at the time. Now, just a little scar to remember the moment by. (Tania’s note: I was not there to witness the pre-injury antics, but am confident I would have stopped the madness before blood was spilled.)

Day 83: Hidden camel thorns | Etosha, Namibia
After a few hikes in Namibia, I started noticing occasional sharp pains in the bottom of my feet. I couldn’t find anything inside my shoes or outside on the soles of my shoes and I started to think I was having some kind of phantom pains. It took me a while to figure out that these giant camel thorns were lodging themselves deep inside the sole of my shoes, hiding there, and then stabbing me whenever I landed my foot on a rock in just the right way. I pulled out 6-7 of them. 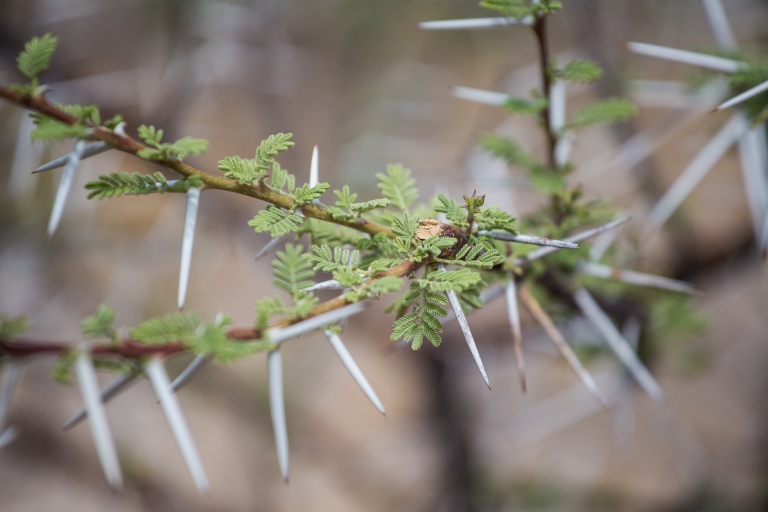 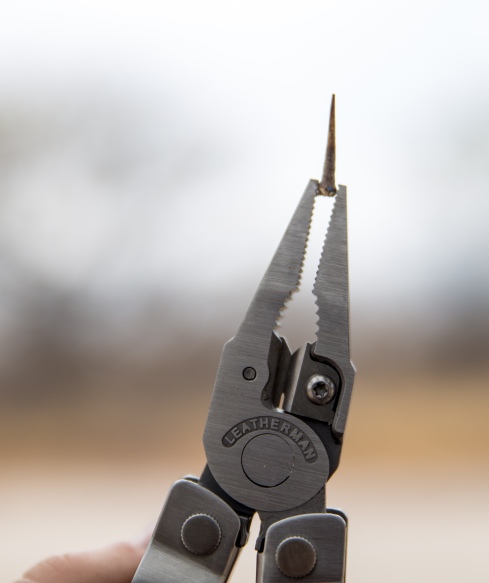 Day 84: Waking up drenched | Okaukuejo, Etosha, Namibia
It was pretty dry while we were in Namibia, but one night it poured heavily for a few hours while we were sleeping in our rooftop tents. I’d left the tent slightly open to let the breeze in before going to sleep, because you can’t really get that wet when you’re sleeping six feet off the ground. Right? Wrong. We woke up at 1am to find our foam sleeping pad was soaking wet. The rain was so heavy that water had pooled on the rain flap until it overflowed – dumping the water into the open corner of our tent. Just to spite me for being too confident. Miserable night, but luckily the next day was hot and the mattress dried out after a few hours in the sun. (Tania’s note: The boys had not been so overconfident so they stayed snug and dry, and had a good laugh at our expense.) 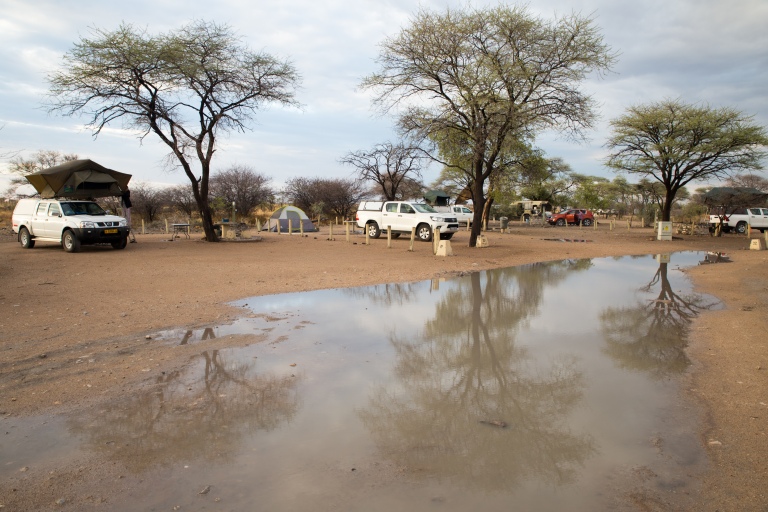 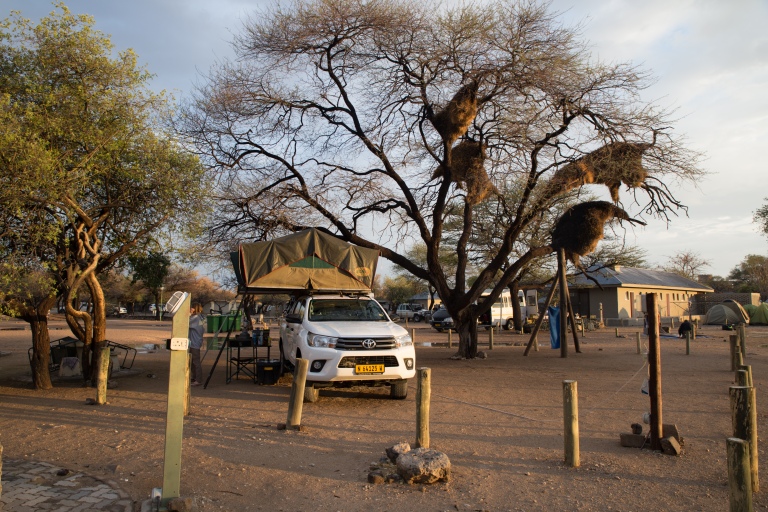 Day 88: Max free climbing giant boulders four hours from a hospital | Hoada Campsite, Namibia
Hoada campground has these crazy boulder piles and the campsites are few and far between. It’s an amazing place. The staff told us to watch out for the baboons, who like to raid the campsites and tear apart the toilets to get to the water. As we were getting settled, I could see them spying down on us from the boulders. A little creepy. The staff also told us not to fall climbing the boulders because the nearest hospital was a four hour drive over a very bumpy road. Max wasn’t concerned about any of that. He disappeared shortly after we unpacked and 15 minutes later was yelling down at us from the top of the boulders. Made me very anxious.

Day 92: Foot swelling to 2x | Spitzkoppe, Namibia
Spitzkoppe, another setting that is stunningly beautiful, yet remote, desolate and very far from a hospital. While exploring the boulders around our campsite, I walked too close to a wasp nest and was stung. I’m not allergic to stings, but this particular African wasp venom didn’t agree with me at all. The swelling was painful and didn’t stop for 72 hours, leaving me with an XXL foot and making it hard to walk. I wouldn’t recommend it.

Day 94: Dead seal on Max’s shoes | Cape Cross, Namibia
Thousands of seals live at Cape Cross. It was an amazing experience to walk around the area, right among the seals. The down side is that there are dead and decaying seals in the sand and the smell of the place is nearly unbearable. After we left, we had to wash all of our clothes to get the smell out. And yet, some of the smell still remained somewhere in the apartment. It took us a while, but eventually we pinpointed the source: dead seal on the bottom of Max’s boots. So gross. We washed them with a hose, but those boots were never the same after that, in my mind. Luckily he grew out of them within a month. 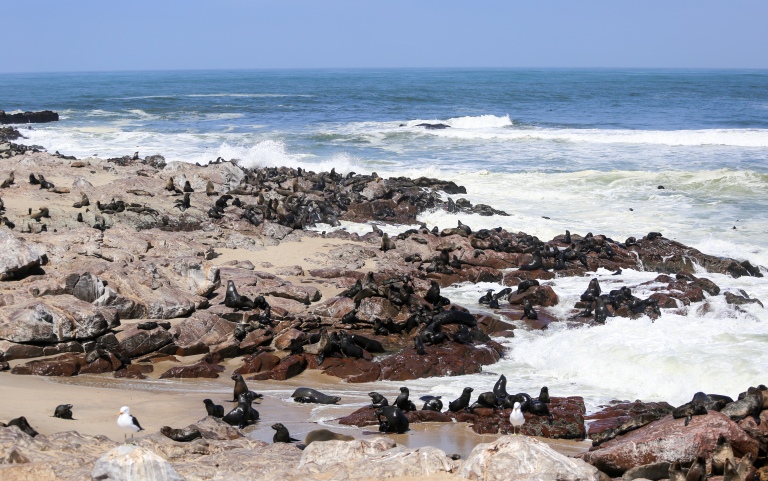 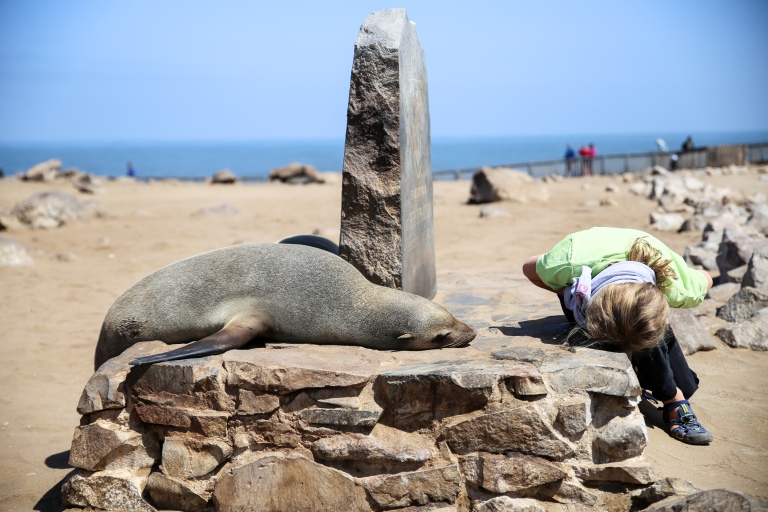 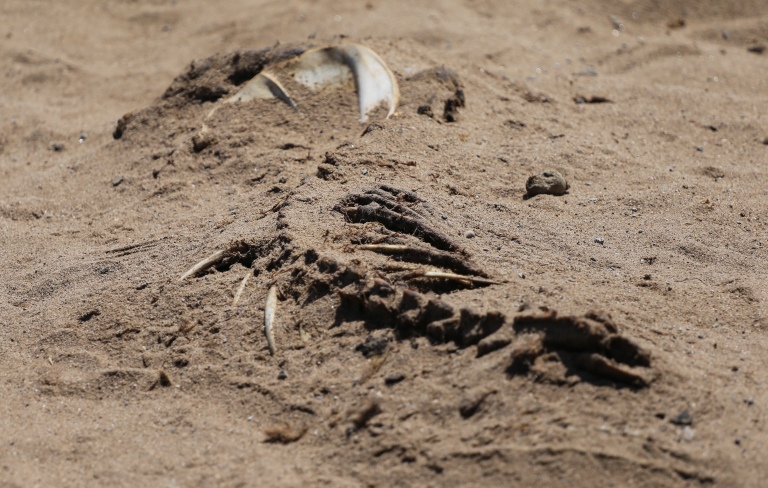 Day 96: Quad bike crash, fortunately not us | Swakopmund, Namibia
We went quad biking and sandboarding/sledding in the dunes. I was concerned for the kids’ safety, but this is a very popular activity in Swakopund. It’s hard to get objective information about how much risk and danger is involved. As we got started, we saw their WARNING sign which was not reassuring (“…not liable or responsible for any death, injury, accident…”) . That said, we did have a great time on the three hour tour until the very end, when we came upon another group where a woman had just fallen off her quad. She was pale, in shock, not talking, possibly a broken arm. That was a sobering end to the tour and we felt very lucky to walk away unharmed.

Day 132: Flooding | Hoi An, Vietnam
We have a habit of arriving in places just in time for historical floods. We arrived in Da Nang, Vietnam right in the middle of the heaviest rainfall ever recorded there. 25 inches of rain in 24 hours. That’s a lot of rain. For perspective, Seattle averages 38 inches of rain in a year – and that’s spread out over 154 days. So, we didn’t do much for a few days after that. The back yard of the house we rented was a pond for a few weeks, but eventually dried out. 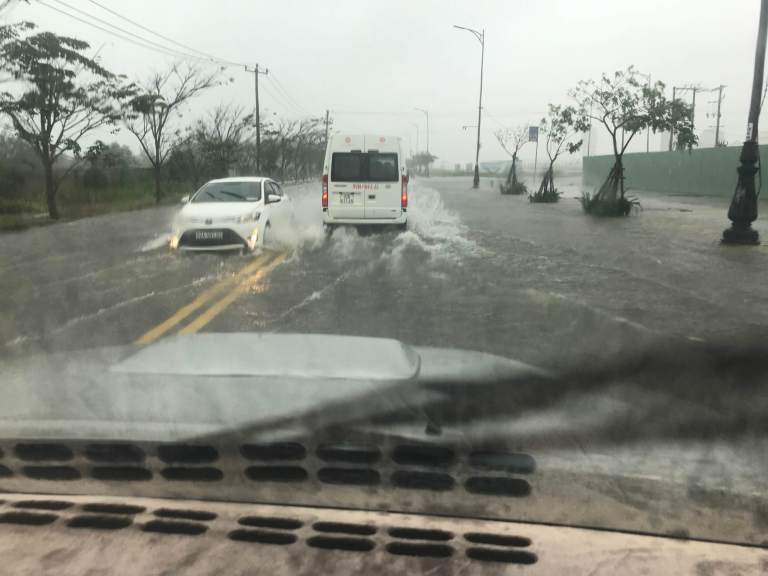 Day 152: The five bridges bicycle tour | Hoi An, Vietnam
It started out innocently enough, a casual bike ride to explore Cam Kim. While there, I did some quick phone mapping and suggested that it would be more adventurous if we tried a different way home instead of back tracking. Three hours later, after biking through a lot of wind and rain, across four more bridges  – including one massive bridge with a 1/2 mile uphill climb, lots of stopping to consult the map, and a couple wrong turns, we were back at home in Cam Thanh. I have a fond memory of this one, but I don’t think Henry has come around yet. (Tania’s note: Kyle is the only one who has fond memories of this particular adventure.) 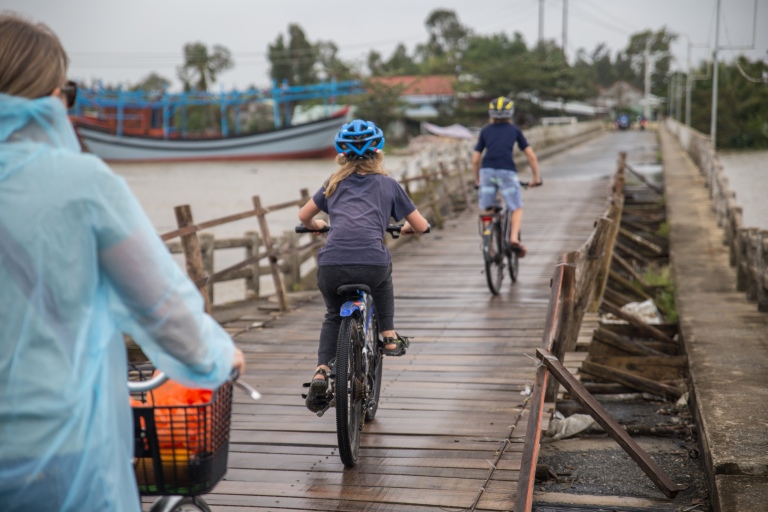 Day 176: Sitting in traffic in Manila | Manila
We spent almost a week in Manila / Quezon City. I think we averaged about 5 mph in traffic. We had a few ~2 hour trips just to get across town within Manila, maybe eight miles. I guess the bright side of this is a renewed appreciation for cities that you can drive across in less than an hour. 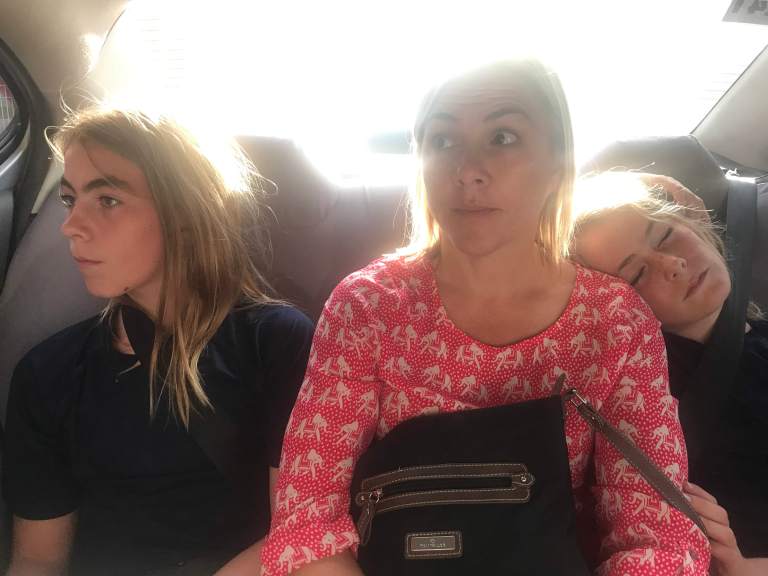 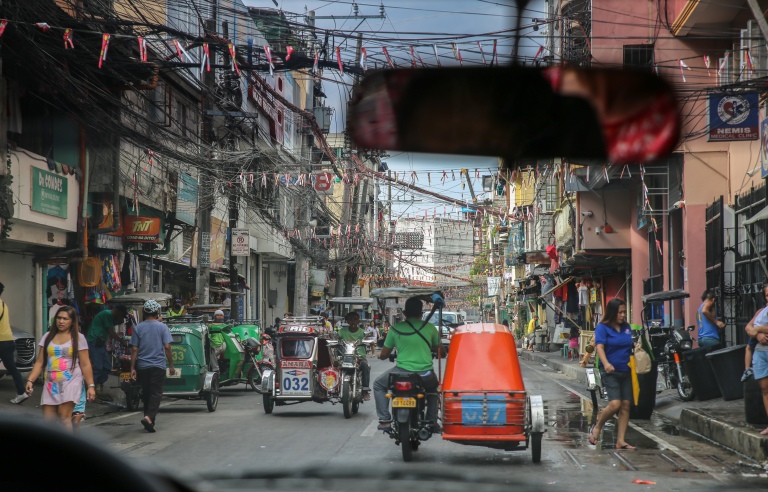 Day 178: Flying through the night ~ Manila to Da Nang
We’ve had several late night + early morning flights. But the best worst of them was coming back to Da Nang from Manila. We left Manila after midnight, had a layover in Hanoi where we ended up walking from the international terminal to the domestic terminal to stay awake. Henry slept on the floor while we waited to check in for the last leg to Da Nang at 5am. I like to think that we’ve grown to appreciate the relative convenience of taking short flights during regular waking hours.

Day 216: 24 hours of crazy | Hoi An, Vietnam
In one 24 hour period, we had three best worst moments. Max wrote about this in A crazy day:
1) We took a speed boat ride over the sea to the Cham Islands and back – possibly the most painful transportation I’ve ever experienced. It was a back breaking ride. We bounced and thudded through extremely choppy water, wincing on each landing, and getting soaked in the process.
2) That night, at 1am Max thwarted a burglar who had climbed a ladder to sneak in through a window. The burglar ran out the back door when Max came out of his room to investigate.
3) The next morning, Max fell and cut his forehead open. I took him to the ER to get stitched up. So, we got to sample healthcare in Vietnam and then later UK healthcare when getting the stitches out.

Day 234: Train detour | London to Dublin
We had a rail + sail scheduled for our trip from London to Dublin, but we arrived at Euston station in the morning to find our train canceled. The staff didn’t have much information about when the trains would run again, so they gave us a few options for getting to Dublin from other stations – though not necessarily that day. We decided to wait and luckily the trains started running an hour later. We took a route that zig-zagged through England with two extra transfers and had to compete for spots on the trains with all the other people whose travel plans had been upended. We missed the afternoon ferry to Dublin, but were able to switch our tickets for a different line, which left us with 5 hours to wait for the evening ferry. We walked into Holyhead through the rain with all of our gear and found a pub to hang out in for a couple of hours. In the end, it was all worth it as we had a great stay with our friends in Dublin. 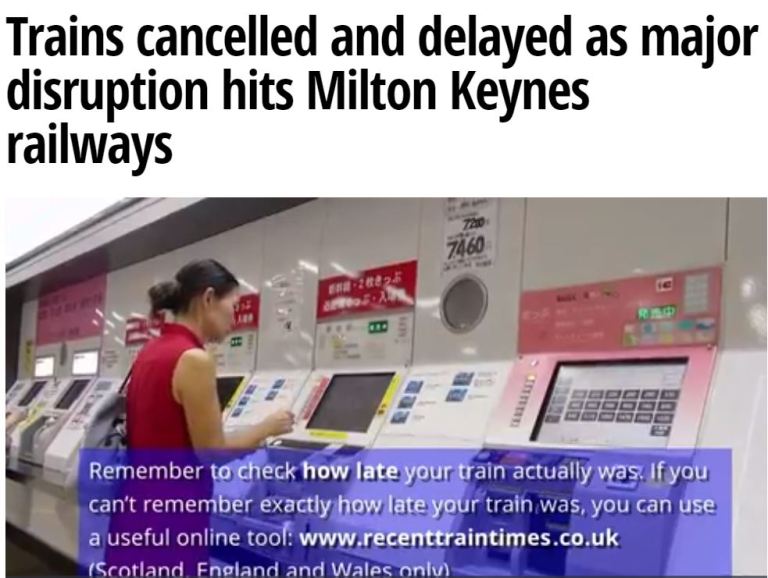 Day 267: Wrong luggage in Recife | Recife, Brazil
We arrived in Brazil late in the evening after a transatlantic flight from Lisbon. In my haste to get to our hotel and go to sleep, I left the airport with a twin of my suitcase. Same brand + model, but different contents. It was almost midnight by the time we got settled in our hotel and realized what had happened. So, I had to go back to the airport and sort it all out. I encountered some challenges along the way (all the airline employees had gone home for the night + couldn’t find anyone that spoke English), but eventually made the switch. And, thankfully when I connected with the other bag’s owner, he was very understanding. 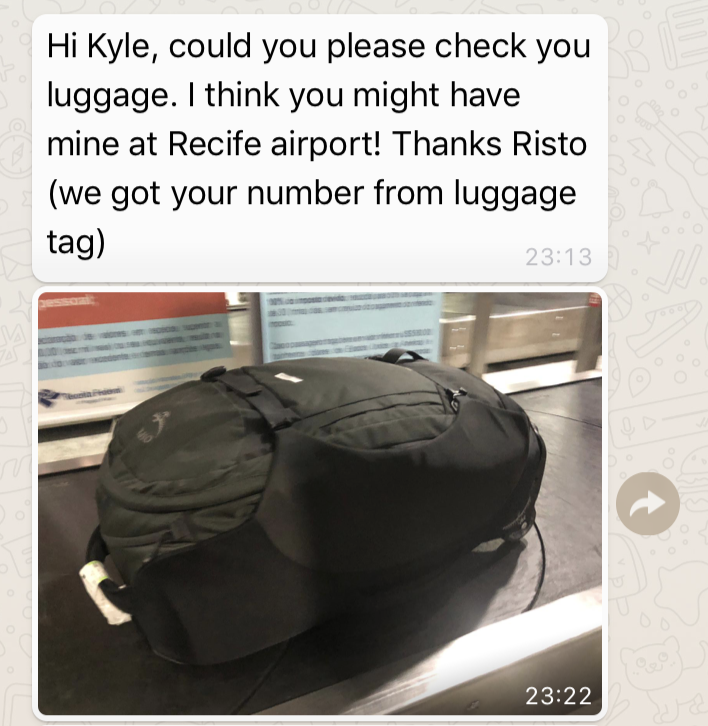 Now that we’ve covered Best Worst moments, maybe my next post will attempt to cover some Best Best moments.

View all posts by kploessl